Today’s interview is with Alex Walker from SitePoint. He’s talking with us about his work for Site Point, the amazing Cicada Principle he discovered, and much more. 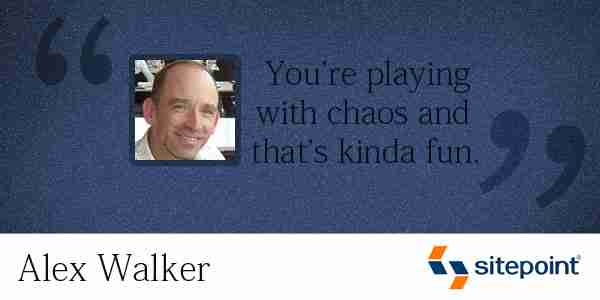 Today’s interview is with Alex Walker from SitePoint. He’s talking with us about his work for SitePoint, the amazing Cicada Principle he discovered, and much more.

1. Hi Alex, for the people who don’t know you, would you tell us a little bit about yourself?

Let’s see, I’m born and raised in Melbourne, AU, and I actually started out in the magazine publishing industry before making the switch to the web in the late 90’s. I’ve always been a little geekier than my arty friends and artier than my geek friends, so I think I was almost waiting for the Web to be invented so I could combine both those parts of the way I think.

2. You manage design and frontend development for SitePoint.com. Would you please tell us some more about SitePoint?

At SitePoint, we focus on publishing really practical web-related books and online courses – everything from coding to pure design to online business technique – and I contribute to different parts of that process. Firstly I design and shoot all our book covers – about 30 books last time I counted.

I also design and code the front-end for the SitePoint network — SitePoint, Designfestival, RubySource and BuildMobile. I also get to write about whatever is getting my attention for either SitePoint, the Design View (our newsletter) and DesignFestival.

3. What is the most fun part of your work for SitePoint?

I’d have to say the best days are nailing a new book cover design concept. Web design topics we cover can often be a bit visually obscure. For instance, how do you depict advanced PHP or WordPress themes? The challenge is to come up with a visual theme that looks good but also hopefully means something — it might be a jetpack for the cloud-computing book or paper cranes for a design book. It’s sometimes hard to please everyone because there aren’t any 100% correct answers, but I really like that kind of conceptual thinking. 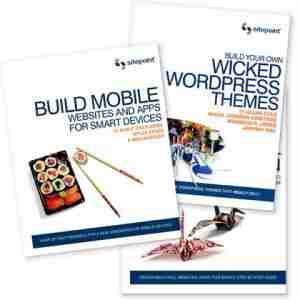 4. What keeps you interested in your work and why?

I think it’s easy to be enthusiastic when you’re working in an environment that really understands the value of good ideas — whether they come from the lead designer or the office manager or the crazy Irishman from finance. So far there are now three successful new companies that started life as small parts of SitePoint. We’re always looking for that next idea we can grow.

5. What should our trainees keep in mind if they want to make their websites as successful as SitePoint?

I don’t think there are any super secret formulas, but I think it helps to keep two things in mind. The obvious first one is make great stuff, or at least be working really hard to make it really good.

Secondly, try to develop something that makes your stuff different from everyone else. At SitePoint we try really hard to focus on making our books both practical and fun, but for you it might just be developing your own unique voice or distinctive style. If what you do is uniquely yours, it’s much harder for others to copy.

6. You just discovered an amazing new method, the Cicada Principle. Would you shortly explain to us how your system works? I suppose the Cicada Principle was a side-effect from reading too much ‘pop science’. A few years ago I read a book called ‘The Music of the Primes’ that described the incredibly precise but slightly curious life-cycles of periodical cicadas. These guys spend 99% of their lives underground before emerging in huge numbers to breed and then die in exactly 7, 13 or 17 years life cycles. Scientists knew that these were all prime numbers — numbers that can only be divided by themselves and one — but couldn’t understand why that should that matter.

It turned out that all the creatures that munched on cicadas — birds, lizards, wasps, etc — tended to live in shorter boom and bust cycles of 2,3,4,5 or 6 years. So if our cicadas lived in 12 year lifecycles, any predator with a 2,3,4, or 6 year cycle would be able to synchronize their boom years with this big cicada party — which is bad news if you’re a cicada.

On the other hand, if the 13-year cicadas were unlucky enough to hit a boom 4-year sparrow year, it will be 52 years before that happens again. That’s a pretty powerful mathematical idea.

More recently I was having problems with CSS background tiles repeating in an obvious and ugly way, when it occurred to me that the cicadas done a pretty good job at figuring out how to reduce unwanted patterns. The idea was to weave together multiple CSS backgrounds using the cicada mathematics. The result creates tiling backgrounds that don’t appear to have any repeating pattern. In reality is DOES repeat, but usually not for a very long time.

At its simplest, that means making multi-layered background tiles that have prime numbers for their dimensions. But once you get the concept, you can apply it in many different ways.

In the original article, I demoed the concept working in three examples, but we now have a public gallery showcasing more than 50 cicada working examples. There’s some really impressive stuff in there.

7. What impact do you think will this method have on the future development of web design?

From what I’ve seen so far, this seems to be an idea that sets people off in vastly different directions. Frank Fuch applied the idea to layering CSS3 rules and came up with a super impressive randomly scattered thumbnail gallery.

It has also been really fun to see designers excited about maths and maths geeks excited about design. Hopefully there are other crossover ideas we can tap into.

8. Where would you be most proud to see the Cicada Principle mentioned? I think in the days after I published the article there was some great geeky discussion threads on both Slashdot and Hacker News that revelled in the mathematics angle. Not long after Veerle Pieters — one of my favourite web designer/bloggers talked about the idea in one of her conference talks. It’s a good feeling to be able to write something that makes sense to such diverse audiences.

9. Please share some tips with our trainees if they want to start using the Cicada Principle.

The easiest place to start (after reading the article) is to pick your way through the Cicada Project. We’re all still working out the ‘rules’ for getting the best results, but you can learn so much by seeing what works on other people’s work — and what doesn’t work of course.

After that it’s just time to have some fun and experiment. It’s strange but I still never 100% know what I’m going to see when I hit ‘refresh’ on a new cicada design. You’re playing with chaos and that’s kinda fun.

Alex, thank you for the interview!

Want to know more about Alex? You can find him on SitePoint and DesignFestival where he writes articles on web design, HTML, CSS, the Cicada Principle and lots of other awesome stuff.

Feeling inspired? Check out our Web Design Courses at Web Courses Bangkok to get you started with your career as a Web Designer.