Jim Tobin is the President of Ignite Social Media, Author of the best selling book ‘Social Media is a Cocktail Party’ and frequent speaker at many major Social Media events around the world. He takes time out of his very busy schedule to have a chat with us

For those who may not already know you, tell us a little of your background

I started my career in politics actually, running a large political action committee, but I never really enjoyed that except for the marketing part of it, meaning fundraising. I later worked in political PR, serving as a spokesperson in the administration of Michigan’s governor. From there, I become a partner in an advertising and PR agency. But in 2006 I became fascinated by blogging first—not as a journal but as a marketing tool. From there, it was a short leap into fascination with other areas, like Twitter, YouTube and the other tools that were coming out about every week back then.

It took me months and months of being interested in this stuff to realize there was a business opportunity here. I realized that brands were going to start to look for help and there were no credible, holistic sources out there that could help them with everything from thinking up a concept, to producing it, to community engagement and the like. So a couple of us built it.

For trainees/visitors who haven’t had the opportunity to read your book ‘Social Media is a Cocktail Party’, can you give us a brief overview?

Sure. It’s written for marketers who have experience but are new to social. Lisa Braziel and I started writing it in 2007 and published it in 2008. The idea is that you shouldn’t let the technology confuse you. This type of marketing is actually the way people like to communicate. Traditional marketing (TV ads, press releases) were the anomaly, even if they were a 40-50 year anomaly. So we talk more about a framework for understanding the potential than the really technical parts of it.

What was the inspiration to write ‘Social Media is a Cocktail Party’?

People were putting the technology first, and getting focused on whether say Twitter or Pownce or Jaiku or Rejaw or Identi.ca were going to be “it” for microblogging, for example. And they were racing trying to keep up, and they were confused. There was this whole new vernacular being created and it was confusing people. Lisa and I wanted to say, “Yes, lots of new words, but the philosophy of this is not new to you. Let us show you.”

Social Marketing has recently become Social Mania, how do you see the “Social” aspect of the web growing over the next, say… 5 years?

The biggest thing I thought about before launching this company was if this whole thing was a fad. MySpace was huge at the time, for example. And I realized that it didn’t really matter if MySpace lived or died, or if Twitter lived or died. People had realized through blogging and YouTube and Twitter and MySpace that they could talk to brands. And they were beginning to expect a response of some sort. I still think that’s true. Facebook could be the AOL of social, in that it grumbles under the weight of its own walled garden (although I sort of doubt it), but sharing content and interacting with brands will get even more intense.

What’s really been holding it up is that companies aren’t set up internally to deal with all this stuff. What department does social go in? And how does a customer complaint get handled when it can really touch marketing, customer support, product development and the like. Adjusting to this is taking companies a while, but they’ll get better at it. Many already are.

There is a trend for business to start a Facebook fan page and think “Well that’s it, I’m on social media….. now what?” what would be the first bit of advice would you give those business?

I suggest to people all the time that they think back to 1990 or so, when people put up there website and asked the same question. If you’re doing it to “check the social box”, you’re not going to have much luck with it. But if you figure out why you’re brand really exists, what need you fulfill in your customer base, and you can connect in a meaningful way, that’s a home run. And if you can give your fan base the reason and the opportunity to brag about you, they just might. And that’s incredibly valuable.

For the small to medium business who don’t have a large marketing budget or much time in a day, where online do you think they should concentrate their efforts?

Social media is the great equalizer in terms of budget. We’ve had absolute home runs for $20,000 and I’ve seen brands bomb with $500,000 projects (think Second Life for example). All businesses, regardless of size, have to think about what they have to offer the online community and who cares about it. For some it’s discounts, for others it’s inside information and for others it’s industry news and information. Thinking that through should get a reasonable amount of time and energy and I think it will give you the answers as to how much time does it take to do that and what reasonable expectation for return can you expect. It’s not a magic elixir, it’s just a toolbox.

After being named on the the ’75 marketing gurus you should follow on Twitter’ and ‘One of the most influential Bloggers’ how do you feel about the 1000’s of people out there calling themselves experts on social media and for the small business looking to employ someone, what should they look out for?

I was new to this just a few years ago myself, so I don’t begrudge people for wanting to get into the space. I sure did. But I don’t think I’d be nearly as knowledgeable about this stuff without the team of 30+ employees at Ignite now who do nothing but think about this relative to their experience. To do this right, you have to know more than any one person knows how to do. I’ve never met the brilliant campaign creator who can sell it, design it, program it, push it out to the social web, manage it, and analyze it.

But for consultants, you have good ones and you have bad ones, like a lot of business. We just have a lot right now, because of a combination of factors here:

2) Tools that anyone can use, even if they can’t design or program;

4) Lots of agencies struggling to reinvent themselves;

5) Lots of personal brand builders enjoying getting paid to talk about community.

Jim, what sites do you open first thing in the morning and last thing at night?

For me, it’s Yammer (our internal company Twitter tool), Twitter and Facebook. If something is happening in this space, I’ll hear it through one of those sources.

What is really exciting you on the web at the moment and do you have any exciting projects in the pipeline?

We always have exciting stuff going on. That’s what I love about my job. Right now, I’m thinking a lot about what’s next. I really think we’ll look back at all this in five years and think how cute it all was. For example, analytics is a mess. You’ve got to open 5 different sources to get a picture of how you did. That’s crazy. There are lots of folks out there, like Argyle Social (for example) trying to make our job much more unified. That’s exciting to see.

Finally, what advise would you give to our Online Marketing trainees in their online endeavors?

See the big picture. Silos are out. If you code in 2010, social matters. If social matters, then keeping up with the tools, the TOS, the APIs matter. If you’re not passionate about this space, you’ll slowly lose ground. And, of course, training never stops. All the Flash folks are looking around right now wondering about HTML5 or Silverlight for example.

We look forward to talking to you again in the future. 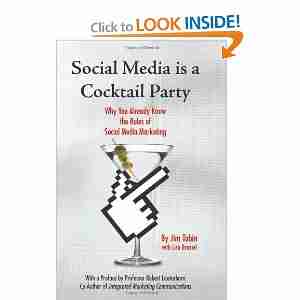 If you are interested in buying Jim’s book ‘Social Media is a Cocktail Party’ Please click on the book image, to go to the amazon store How to Brand yourself as a Freelancer

By Carl in
Design
There is more where this came from
Join our monthly newsletter packed with course dates, latest articles, free resources and job opportunities
Promise to only send you useful interesting newsletters once a month.