What Does the Ideal 2012 WordPress Theme Have?

In this article, through a deep analysis, i will list all the features that THE 2012 WordPress Theme should have.

A New Year brings always a lot of new things in the digital world. New software, upgrades to make our life easier than ever or in some cases increase the number of issues we might experience with some software. The same happens in the webdesign world, where new WordPress themes are released while some others are improved, new scripts and new frameworks that blink one eye at the smartphones and portable devices.

And it’s about the WordPress world that my blogpost wants to point your attention at. And i want to do that goin’ through specific “sections” that refer to one common point, one common question: what does the ideal 2012 WordPress theme should have?

Let’s get deep into it…

Fantastic design that is easily modifiable

I’ve personally seen a lot of themes in these last two weeks, mostly for the fact that i had to write down an article for the blog and i got lost by the amount of minimalistically sexy theme available for free on the net. I’ve seen many complex themes too, expecially on the Awwward.com website. But the first thought that went through my mind has been “what if have to make some changes here and there? will these break the whole thing? Unless you know what you’re doing, you’ ll end up struggling for hours or days until some kind soul will sort you out. The best thing is to keep a balance between good lookin’ & easy-to-use. Or…minimal all the way! Remember that isn’t the number of colours or what’s moving on the screen that make a theme successful. You can use only black/white and still be able to create something unique that 16.000.000 colours can hardly beat!

Responsive design for Mobile and Tablet

Judging by how fast the technology evolves and how many youngsters (and not only!)  spend HOURS of their day on iPods, iPads, or any other PDA device running Android, iOS, Symbian, one of the requirements that a 2012 theme should be compatibility, by default. At the moment there are several plugins, like WordPress Mobile Pack , WordPress Mobile Edition , WordPress Mobile by Mobify or MoFuse WordPress Plugin  for WordPress. Having a website that’s easy accessible through PDA’s grants you a major number of visitors.

PSDs of all the pages and individual elements

I personally think that makin’ available all the pages as PSD would help newbies to practice and learn how to achieve such results. The downside is that many of these would turn into webdesigners and sell aswell their products. So might happen that if at first the request for fresh quality themes was high opposed to a low number of top designers, at some point the situation would change and turn a profitable market into a saturated one where the level of quality and lack of flaws supplied goes down to leave space to an increase of the demandr  of quantity, where the files are not certified at 100% with an high risk to incour on bugs and lots of alpha-beta versions that take months to be ready, and once released, they still keep crashing (rings a bell here).

Colour variations of the theme

A theme which features a different color schemes could be useful both for the newbies and the well-trained web developers. The newbies can use it in its entirety, to study how it works, customize it or simply change the colour scheme and keep it as it is. The trained developer instead might use it as some sort of Swiss Army Knife, to test drive right away all the ideas (in terms of design-colour-plugins) that were, for example, previously discussed with a client. In such way he/she can have a brief overview of the time needed, costs,  and how to get the best out of it.

Custom CSS box, that overrides all other styles

There’s already something available out there as an external resource:

Generally, you can use a lightbox to display an image or video without forcing the user to change page. So, taking in consideration the speed on how medias are evolving (streaming platforms,  video formats,etc) having a short-code handy would definitely make things easier.

Would be a nice addition, useful when you’re working on a project and you end up with several different ideas in terms of design (might be just a color-scheme thing but also a menu/sections related thing). Giving the users the possibility to switch from one to the others would definitively improve the usability & consequentially the traffic and user response.

As mentioned on the ‘Lightboxes’ section,  I think that would end up bein’ the main use for short codes.

CSS3 already let you do that as seen here (http://www.wpmods.com/css3-buttons-with-wordpress-shortcodes/), but  having a short code handy would save you the time spent on coding it and then tweak and tweak until it looks the way you want.

An useful features expecially on those which businesses rely on photography, from stockphotos to a proper photography site, a furniture/clothing shop or a modeling agency.  There are a lot of cool WordPress plugins that take care of photo collections such as the NextGen or  something like Gallery2 (that I’ve been using on my server). Also depends how customizable would be once set up, as one photographer might require additional or specific features that isn’t possible to obtain with the short code version, and so that will require the installation of an external gallery package.

They would be useful if the theme also implements SEO features. So in this case it would be targeted mainly for those who wanna promote a business online more than simple users. There are some plugins that can handle that such as (http://wordpress.org/extend/plugins/ad-minister/) or (http://wordpress.org/extend/plugins/js-banner-rotate/) that uses JS libraries to function.

Shortcodes accessible via a button on the post/page editor

This, for example, integrated in a theme like the one in the photo above called Isabella (http://themesumo.com/wordpress-themes/izabella/) . More additional ideas to come in 2012 for sure….

I think of them as a way to create, edit, and store information in the same way as blog posts but with much more creative control. There’s people that in the past has been waiting for WP bein’ able to handle custom post types. There are already some solution like for example (http://wordpress.org/extend/plugins/custom-post-type-ui/)  or also (http://wordpress.org/extend/plugins/custom-post-type-list-shortcode/)  but having this implement in a theme would be even better that goin’ through a plugin search. Thing is, a plugin version can be easily updated, while bein’ bundled as a theme, would require the user to wait for a theme update to benefit of all the internal changes, from short codes to additional features.

I personally love the Ajax boxes when leaving comments, you can see in realtime your comment bein’ posted as soon as u click OK. Would love to see a short code for it, would make things so easy!

Does not require additional plugins to function

That would be great but at the same time it would mean that the theme would take a lot of space on disk since it would have to contain customized libraries-files that can handle almost anything.  Maybe this could be handled in a different way, as a separate downloadable package, so that the user might choose if use the customized files or be able to choose other solutions to implement the needed features on the theme/project that’s bein’  developed. The main consequence would be a possible incompatibility between languages/formats or plain crashes. Even on the audio side, bein’ myself a musician, it’s always some sort of dark side since you never know how something deals with everything else unless you take the risk to try it out. As experience teaches…backup the project first then shred it down….

I stand on my idea that it doesn’t matter if a logo or a text has a lot of colours or a particular design. Just look at the new Pepsi logo. It looks weird compared to the one we were used to. Also think bout’how many logos  are extremely minimal that are stuck in our minds “for eternity” like the “The Times” newspaper or the Heineken green if we talk bout’ color schemes.

All depends by the way its dealt with. Using the fonts directly from Google could also improve system performance, expecially on Windows since many users tend to install TONS of fonts and end up using only 10 of them, with side-effects that might go from slowing down the system to continuous crashes with the risk of losing the project the user is working at. Also, would make easier the life of everyone, since there would be no need to struggle to find out THAT specific font or pay for the licenses of fonts that might end up used just once. Btw, if you guys need all the Google Fonts , you can get them from here… http://code.google.com/p/googlefontdirectory/

SEO as part of theme

A must have features for those that want to install a blog/website without having to modify or install anything else as they’re already “SEO  enabled” since the very first run. The people wants to get involved into marketing and business even more, probably a consequence of the global crisis but that’s my point of view of course. In any case, with a bit of customization, any theme can become SEO friendly, like they explain for example here (http://yoast.com/wordpress-seo-theme/).

I still think that language files should be something that comes as external packages for the following reasons: 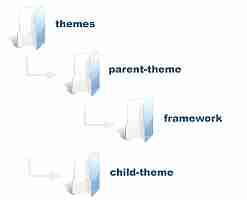 Considering the fact that child themes are becoming more current and the correct way to work with WordPress:

This also would be a nice addition that always ends up under the “training” category, where newbies but also experience user can have a quick overview of what is possible to obtain with a specific theme and, expecially for the first ones, learn how and where to apply changes to the theme.

This goes hand in hand with the complexity of the theme itself in first place as one user might PRETEND to find inside the package a Pdf file that explains all the sections and features of the theme and if not a Pdf at least an online Wiki to check whenever its needed. Screencasts could be provided too, online I mean, unless there’s someone that wants to give out themes on media such as cd,dvds or pendrives…some sort of VERY personal customization lets’ say. Support is what matters in terms of developer-client relationship. Clients deserve attention, care…if they feel left out for some reason (e.g.: a bug that can’t be fixed) they will leave the developer out too. It’s a double-cut weapon but also what really helps to create a solid, mutual respect.

So let’s see what the 2012 will bring us in terms of themes and features…..and let me add one more thing….keep always an eye on our website…cause you might see something REALLY interesting very soon 🙂